4. Pyramid Cities as solutions to world unemployment and poverty

How can we make sure the poor continue to exist without the principal “no job, no food”? 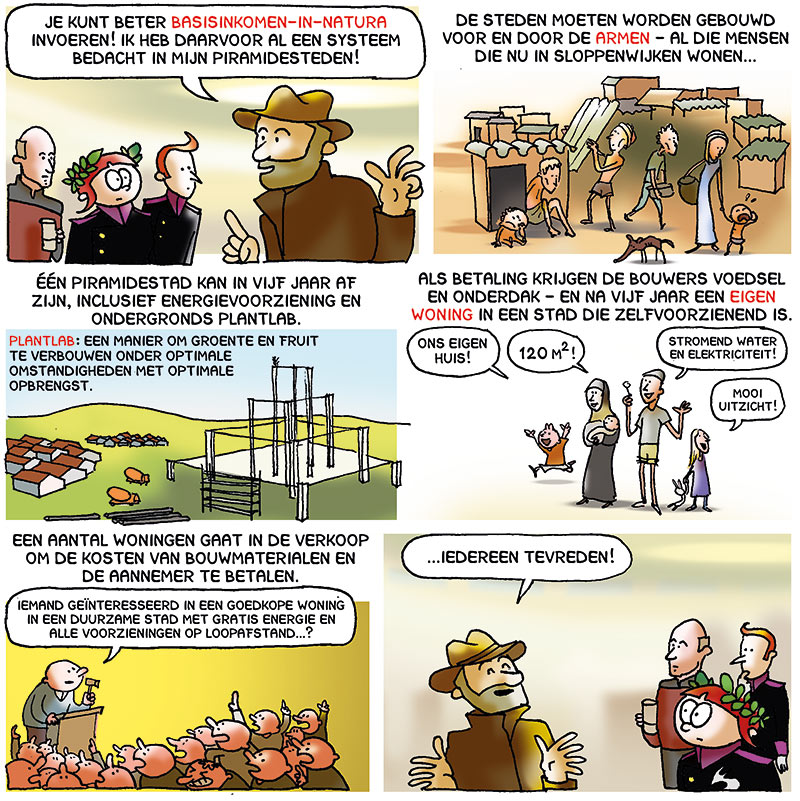 In order to become independent of the principle “no job, no food” worldwide, all the poor and unemployed need to have a basic income-in-kind before their thirtieth. In other words a debt-free house and lifelong provision of food, clothing and energy. Only then can they be independent from the principle “no job, no food” or social benefits. We have to change “no job, no food” to “no job and still make a decent living”, the exact opposite. To provide all the unemployed with a decent and dignified life, we must no longer let our future cities be built by profit-oriented developers, multinationals and banks, which only provide a debt economy, banking crises and overpriced homes, but by the uneducated poor themselves. Whom after 2 to 3 years of unpaid working build such a city are rewarded with a basic income-in-kind. The money we are currently spending on experimental development work can then be used to finance the construction of these cities. This basic income-in-kind is the only peaceful alternative to the current capitalism, communism and socialism. In addition to global poverty we would then also put a stop to the ever-increasing flow of refugees. 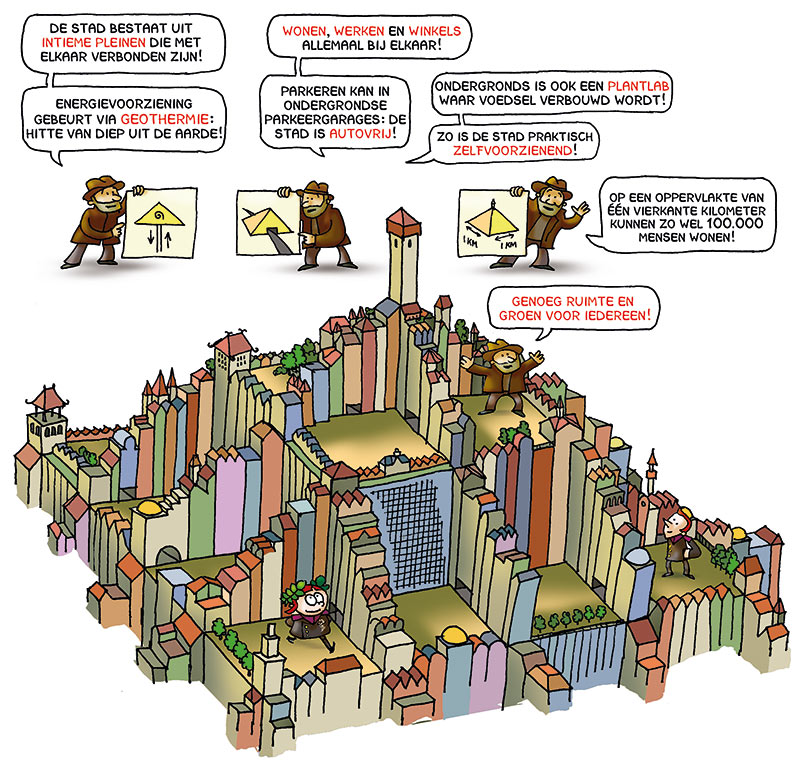 But with the current post-war urban development that will never happen, because those buildings can only be erected by skilled workers, who are employed by developers, multinationals and banks. To build towns with unskilled labourers we need a new form of urban development. These cities need to be quickly and easily built by unskilled workers on the assembly line, like cars in the auto industry. The cities must be like a child’s Lego set. Additionally, our food shouldn’t be coming in from all over the world every day, but should be available to us within walking distance. We need to build compact pyramid towns with local urban agriculture.

C. Complete cost recovery through the sale of remaining houses

For instance, a pyramid city with 100.000 inhabitants will have roughly 30.000 homes and 3 million m2 available for functions such as shopping, hospitals, businesses, etc. Such a city can already be built with 15.000 unemployed, and these poor are subsequently rewarded with a free basic income–in- kind, leaving about 15,000 homes that can be sold and 3 million m2 of space that can be rented out to serve different function. The cost of housing and the rental of function areas will be very low because the land costs are zero, with 5 m2 of land per dwelling of 100 m2 and no wages or profits to be made by property developers, large contractors and banks. The apartments can then be sold for such a price that all costs will be covered, including any money borrowed for bed–bread–bath during the construction period. Essentially, it’s free for all.

In the Netherlands, the remaining owner-occupied homes would currently sell for an average of €98.000 E or €450 per month. For that price they have a four–room house, considerably less than the homes of developers, major contractors and banks, which are often sold for at least twice as much. The 3 million m2 functions for shopping and such will be almost free and can be freely rented by the community.
Due to mechanization, digitalization and robotics fewer and fewer unemployed will eventually be needed to build such a city, which will lower the sales costs even further.