5. What are the differences between pyramid cities and postwar suburbs? 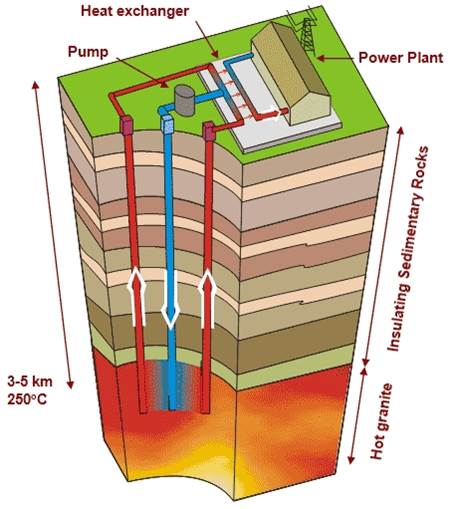 In post-war cities everything is located a car-drive away, causing traffic jams and other traffic problems. In pyramid cities residences, shops, work and relax facilities are all within walking or cycling distance (max 500 meters). It should be designed as such that working outside the city is prevented as much as possible. Everyone lives around car-free plazas as big as a football field, with no car traffic in the city. The floor plan and facades of each house are designed by the residents themselves. All houses have a large covered outdoor terrace. Unlike the post-war cities which consist of closed blocks. Identity, intimacy and integration are therefore guaranteed. On the four corners of each square you will find the stairwells with elevators, so that each floor can easily be reached. From the parking garage on the ground floor, everyone can access their home plaza using the stairs. The first floor contains a PlantLab–food system, which supplies adequate food and raw materials for making clothes for 100.000 people. It is also possible to incorporate cattle houses on this floor. On the ground floor are shops, restaurants with terraces, cinemas, schools, theatres, cafes, churches, etc. Below the plaza there is for hospitals, business premises, offices, convention centres, sports halls, etc. These areas get their daylight through light and air shafts, sized 16 x 16 meter or even 48 x 48 meters. All energy required for such a city is extracted from deep geothermal energy. Pyramid Cities are built as a single building. They can even be built in inhospitable areas. Site preparation is unnecessary. 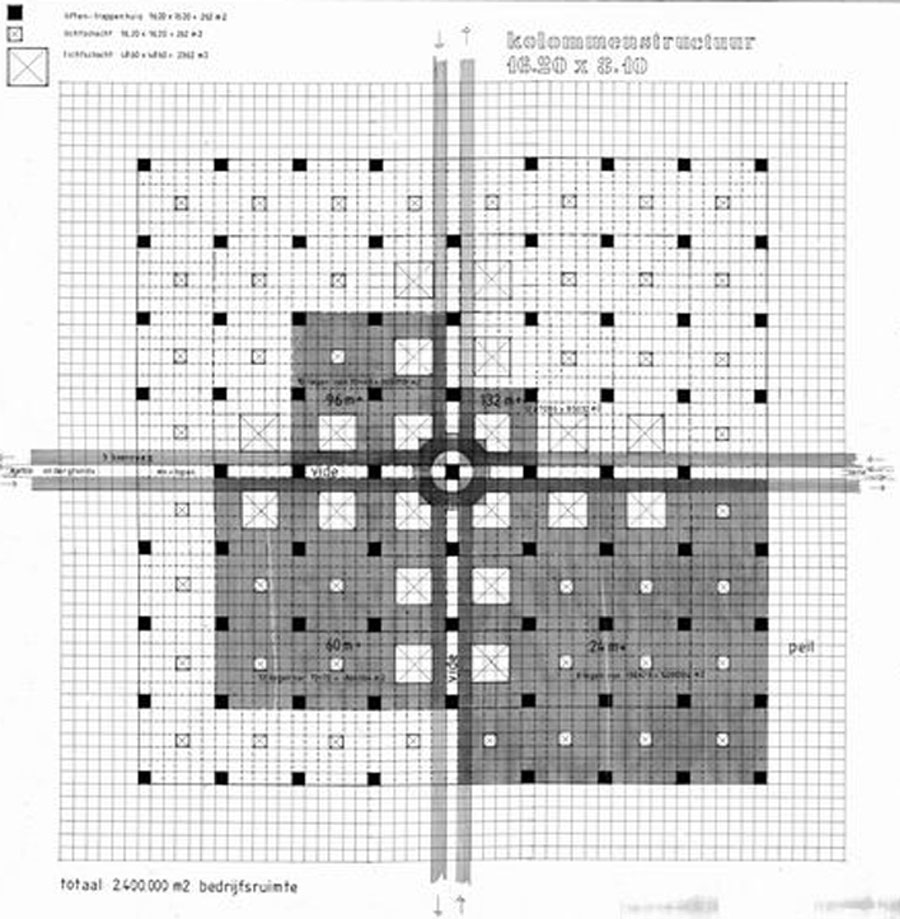 Pyramid Cities are set up like Lego sets. They are quick and easy to build by unskilled workers and consists of six different fully prefabricated parts, which are assembled on site, such as: 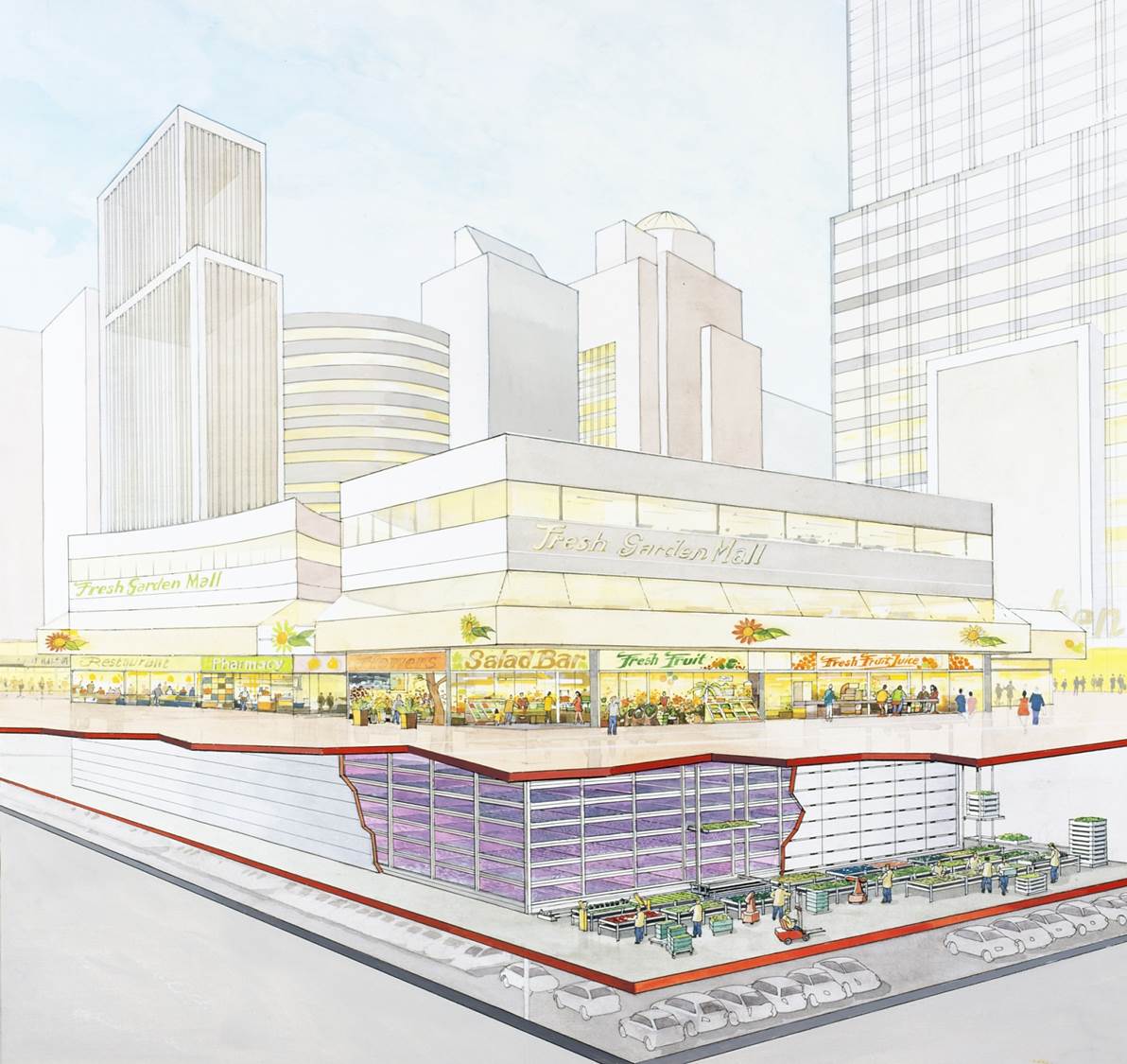 In order to make these prefab parts on the assembly line, six halls are needed. All pipework is mounted in between the floors and residences. A 60cm of free space is available. Elevators, stairs, etc. are installed in the workplace. Pyramid Cities withstand floods, hurricanes and earthquakes. 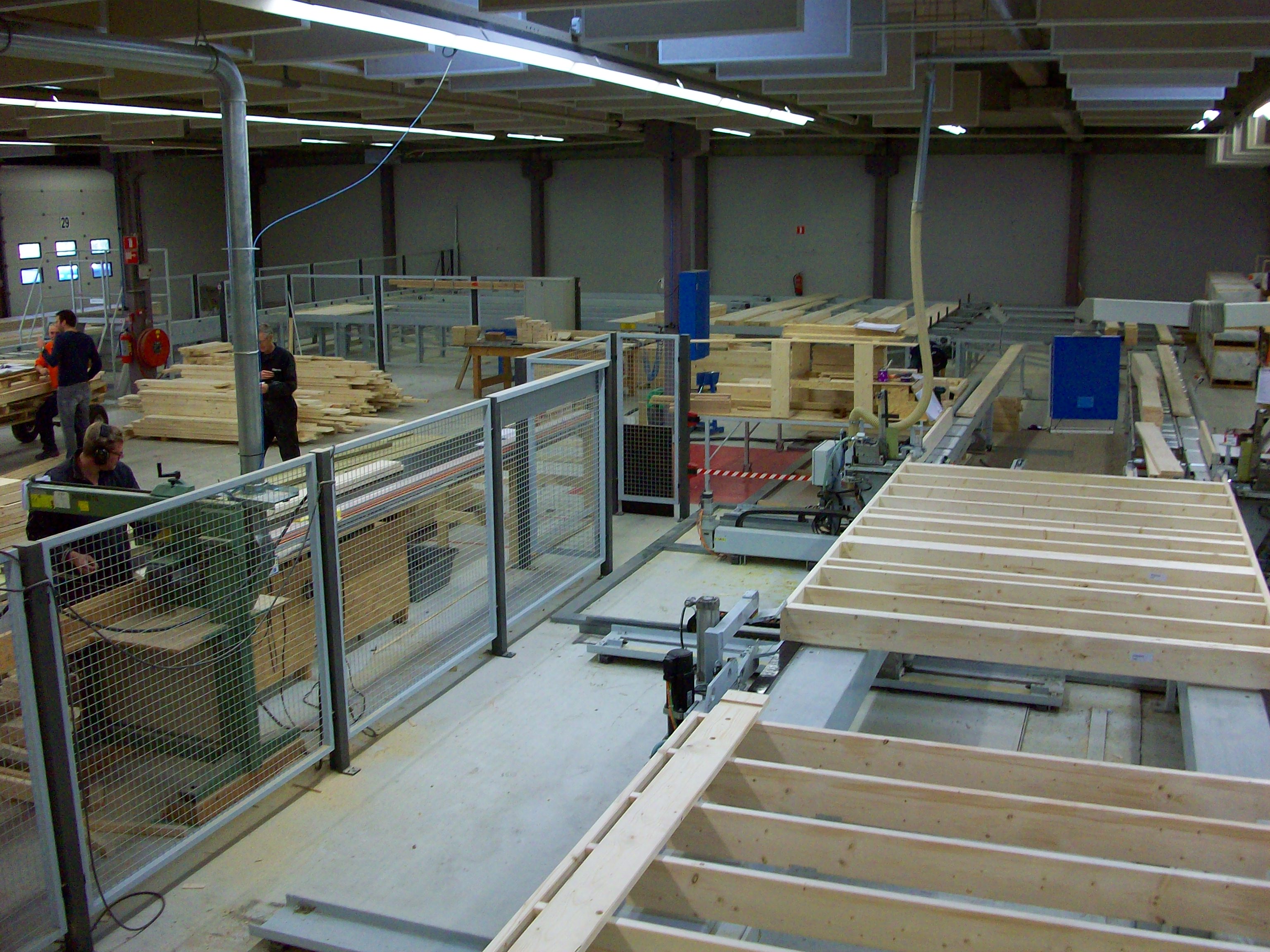 Building cities as fast as we can

Just like in the car industry, all components of pyramid cities are built on the assembly line by unskilled workers and then be assembled by unskilled workers in the workplace, which is very much contradictory to post-war urban development. It works the same way as the example of Adam Smith’s pin factory, few people can produce very much. Once the train starts going, a city can be completely constructed with 1 to 2 years. And that’s a good thing because in 35 years we will have to be able to provide food and a decent shelter to 4.5 billion slum dwellers. To achieve this we have to build 3 pyramid cities every day. The production rate of pyramid cities and the number of unskilled workers that is required, depends on the degree of mechanization, digitization and progress in the field of robotics.

Post-war cities on the other hand, can only be traditionally built with developers, multinationals and banks, using trained professionals. They will however never reach these production numbers, partly because the slum dwellers have no money

D. Size of the cities. 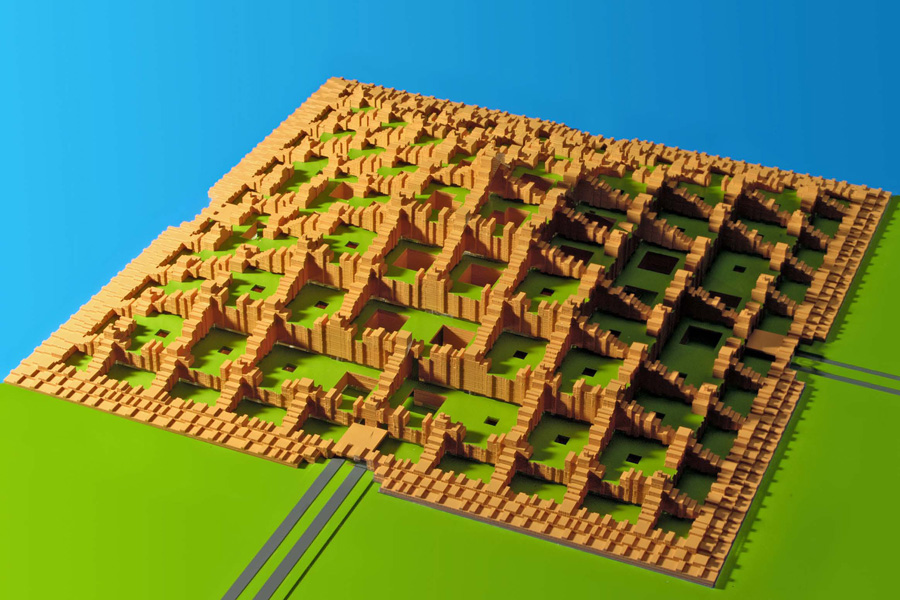 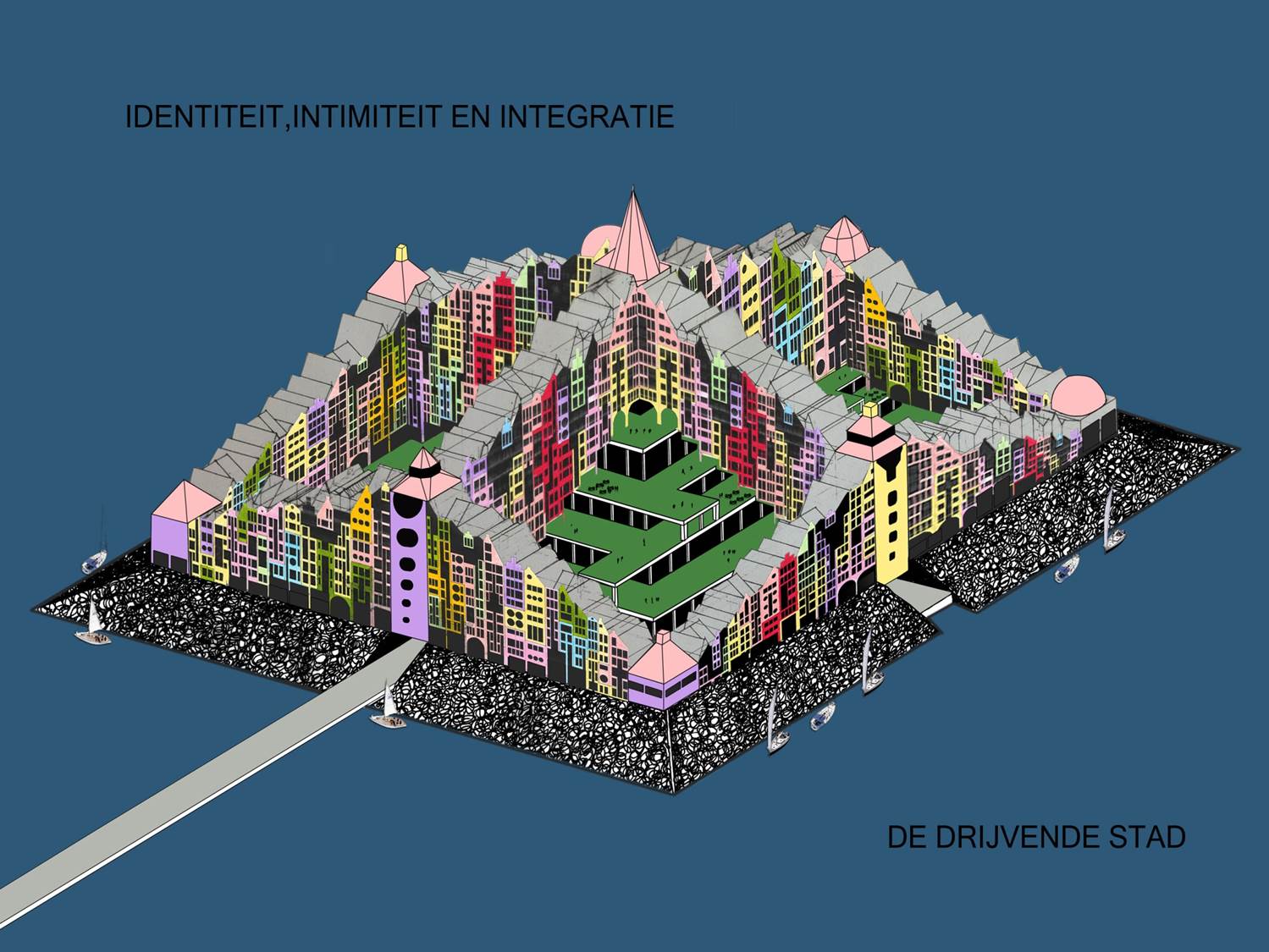 Pyramid cities can be built in all shapes and sizes, but should have no more than 100.000 residents on 1 km2. A pyramid city of 100.000 inhabitants for instance has 100 plazas the size of a football field. All of these plazas are connected across their full width to other plazas. The average plaza walls are 10 storeys high. If these plaza walls are built in a single layer, you can house 10.000 people. 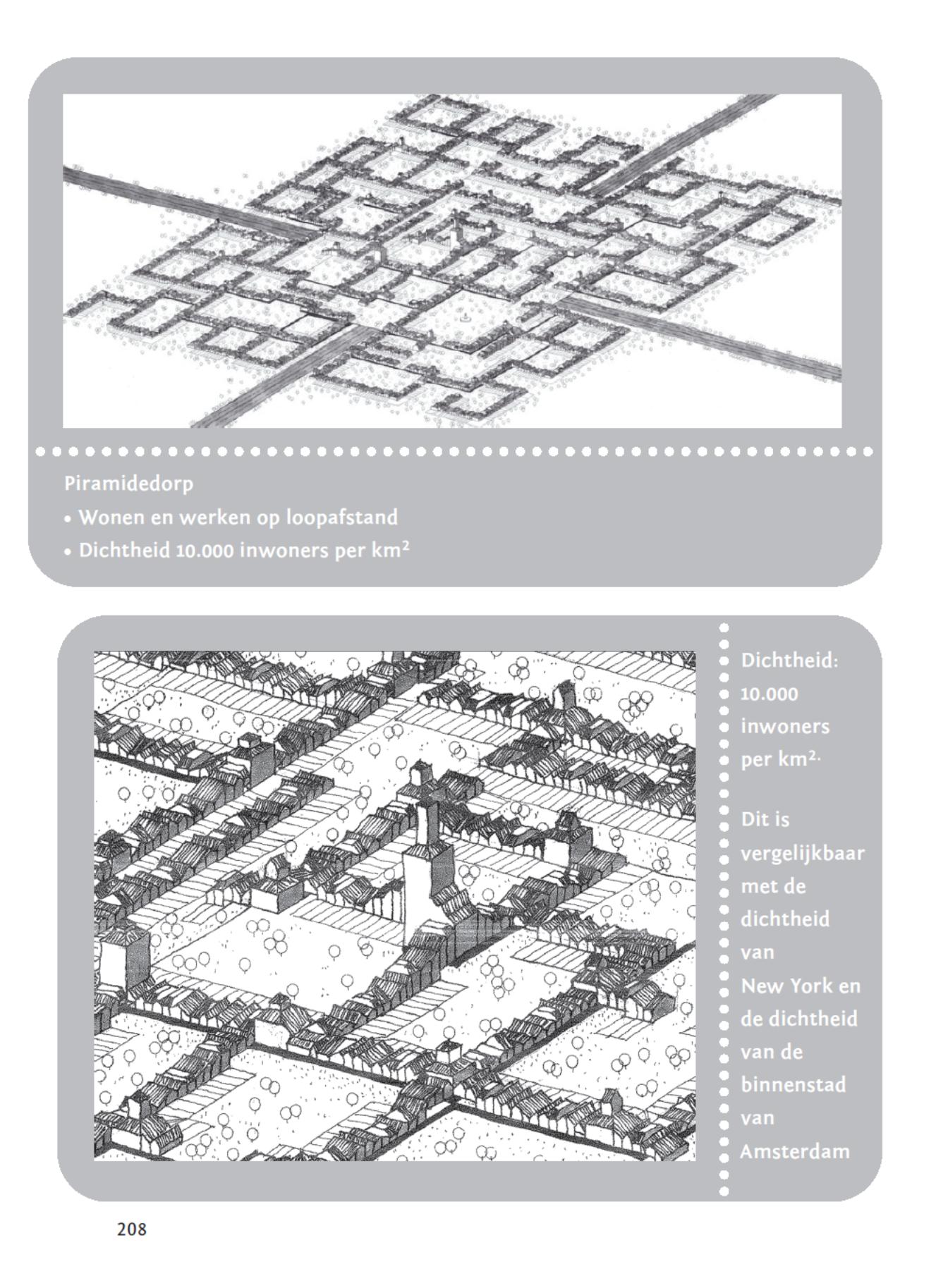 In two you could house 20.000, 30.000 for three layers etc. It is also possible to construct only four plazas, or any number of plazas up to 100.
Larger cities have a checkerboard structure in which the black squares are cities of 100.000 inhabitants, and the white squares are green areas. All four borders of the city will be adjacent to 1 km2 green area. In total that would make 4 km2 of green areas for a city of 1 km2. 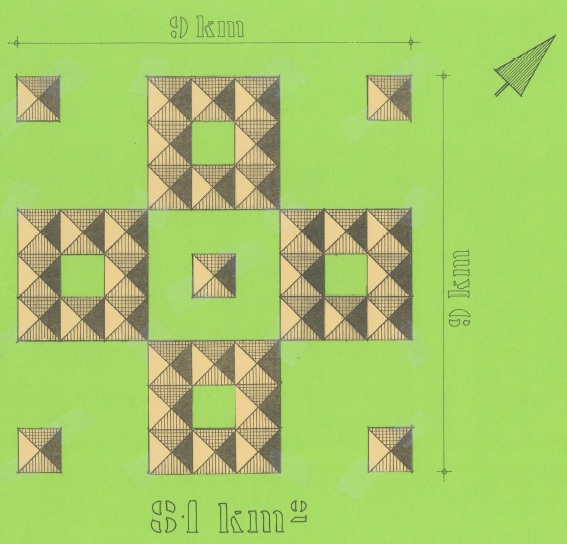 Without roads pyramid cities require 30x less surface than post-war cities. A city such as Alkmaar currently requires an area of 30 km2 for 100.000 residents. With pyramid cities, 1 km2 would be sufficient. Including the extra-urban roads and buildings this number even grows to 50x less surface area that is needed. So for 4 billion people, using pyramid cities, you would need 40.000 km2, the surface area of the Netherlands. With post-war planning you would quickly need 50 x 40 000 km2 = 2 million km2 for the same amount of people, the surface area of Argentina, a huge impound on the Earth’s fertile surface. In the latter case, 2 million km2 farmland will also be lost and many plant and animal species will become extinct due to lack of territory.